This is the most famous and iconic structure of Nepal. This has been the cover of numerous travel books scattered all over the world and written in different languages.  Boudhanath is famous among tourists as well as locals and is a UNESCO World Heritage site. Pilgrimages are being done all year round to this place and is one of the holiest Buddhist sites in Kathmandu.

It is pretty amazing to see the stupa right before your very eyes. My jaw dropped at how beautiful and majestic it looks with the soft hum and chants of people praying while spinning the prayer wheels as they go around the stupa. 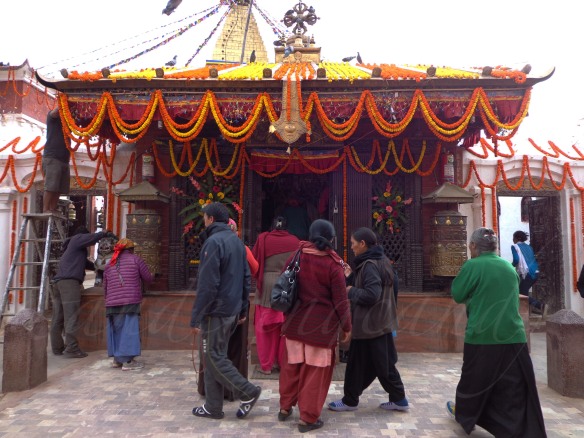 I joined the devotees going around the stupa in a clockwise direction and went up to the stupa. It’s even more beautiful up close seeing the prayer flags and the painted eyes.

I came back after a couple of days and stayed in a guest house nearby. I left my stuff in my room and decided to go around the area. There are a lot of cafes, restaurants and shops surrounding the stupa. I shopped for souvenir items which are reasonably priced compared to those found at Thamel (travel tip!).

After shopping, I bought a small tub of seeds and fed the birds with the locals.

It was almost sunset so I decided to search for a restaurant with a great sunset view. I ordered some tea and waited for sunset.

At night, I came back to the stupa to grab some dinner and I was surprised to see a number of devotees praying and lighting candles. I didn’t bring my camera so I used my phone to snap these photos. 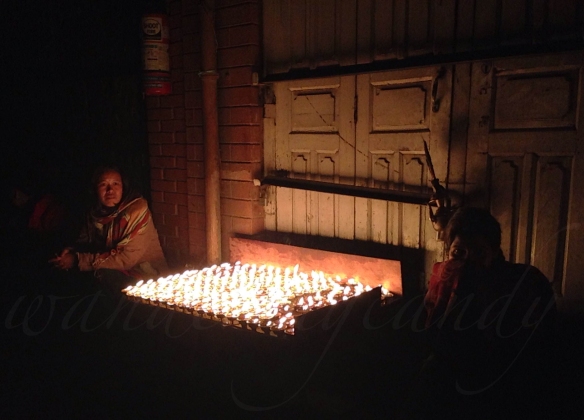 Even before the crack of dawn, the place was buzzing. The guesthouse where I stayed is owned by a monastery and I can hear people walking about outside the streets. I hurriedly dressed up and went to the Boudha grounds. Monks were sitting by the side with little tables. People would come and make some offering and prayers are said for good merit.

Compared to last night, more tables were set-up covered with lots of tea lights. I joined in lighting the candles while saying a silent prayer. 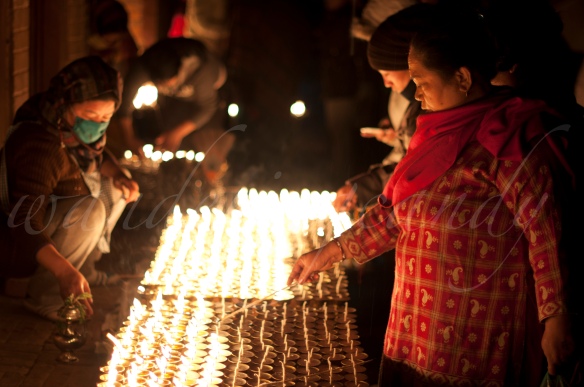 I went around the stupa and monasteries surrounding the Boudhanath are also doing their morning prayers inside. I witnessed a monk praying with his whole body while going around the stupa. 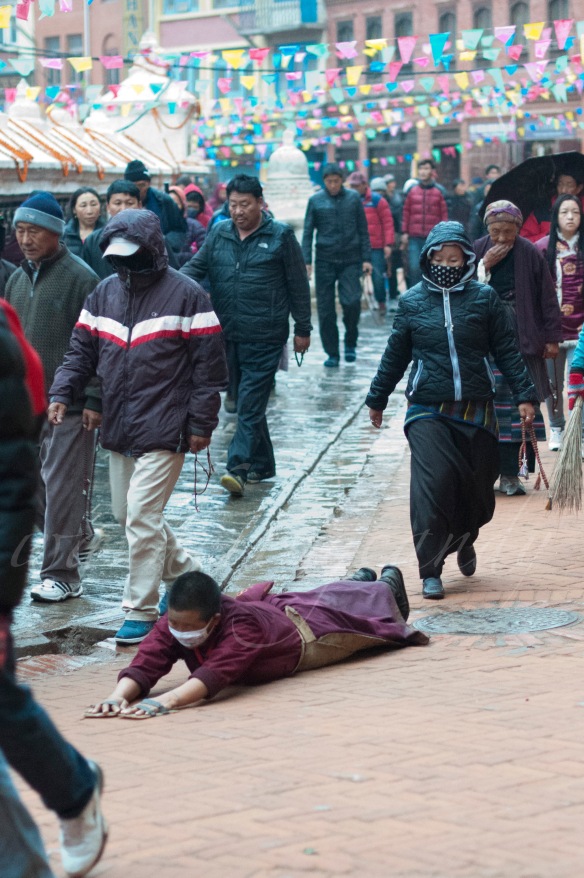 Armed with their prayer beads, people continue to walk around the stupa.

I felt lucky to have witnessed and be a part of the morning prayer on one of the sacred Buddhist sites in Nepal. The memory will forever be etched in my heart.

Sadhu is a Sanskrit word meaning good man or holy man. They dedicate their life to their spiritual practice by meditation and contemplation. They live a rugged life with a detachment from common luxuries which deters many from following such a path.

Pashupatinath is considered the holiest site for all Hindus all over the world. The name Pashupati means ‘Lord of Animals’ and is the patron deity of Nepal. Locals and devotees from different countries come to visit this temple all year round. The photo below is the main gate of the temple. 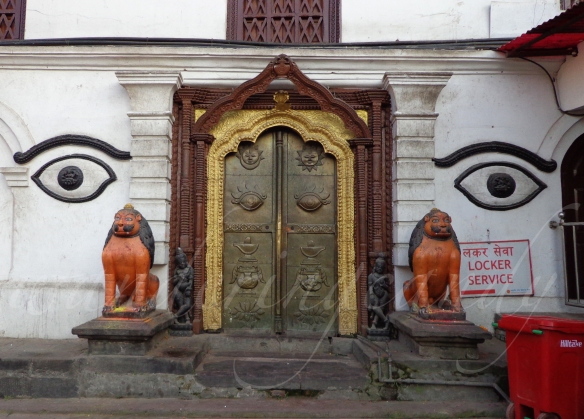 I couldn’t go inside the temple because I am not Hindu. But there is a certain point outside the main gate that you can take a peek of what the temple looks like inside.

Another way to view the temple is to go on the opposite side of the river bank. There is a viewing deck where you can see the pagoda style temple of Pashupatinath with devotees coming in to sing hymns and say prayers. You also get to see monkeys roaming around as shown on the photo below.

Coming down from the viewing deck, you will also see sadhus hanging around the area. I couldn’t resist, so I had my picture taken with them. 😀

Along the banks of the holy Bagmati River, one can find the Crematoria. It is every Hindu’s wish to be cremated here, the holiest river and temple for all Hindus. I posted a picture of the Crematoria on one of the weekly photo challenge.

Observing the cremation process was something that I always wanted to witness. There were different points where they do the burning. It was winter time when I visited and the Bagmati River’s water level is very low and as my tour guide said, “It’s more like a stream than a river.”

Before leaving the place, I couldn’t resist taking a photo of the sun almost setting. 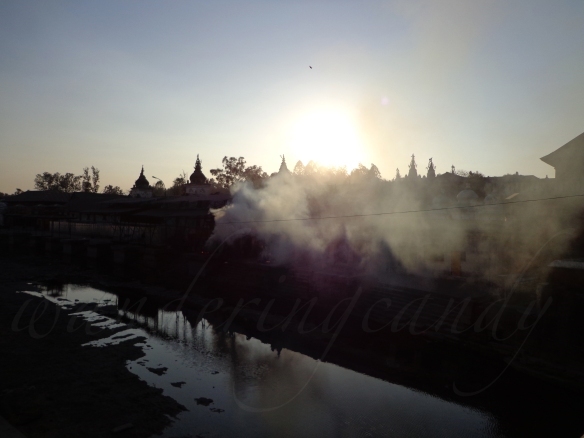 Til the next exploration! 😀

For this week’s Street Life I have chosen Freak St. in Kathmandu. Welcome to Freak Street aka Jhochhen Tole got its name during the hippie trail in the 60s and 70s. This is an alternative place to stay when you don’t want the crazy touristy places in Thamel. You get a glimpse of the local life early in the morning and it is close to Kathmandu Durbar Square. This shot was taken while I was standing in the middle of the street – talking about Freaky experience and a car coming your way. Looks like a scene from Twilight, eh?

Kathmandu Valley is the most developed and populated place in Nepal. It serves as an economic hub of the country and is the first touch point for tourists coming to explore the beauty and culture of Nepal.

This is an ancient temple found on top of a little hill built in the 5th century AD. It is one of the UNESCO World Heritage site in Nepal with temples scattered around the complex as well as a monastery. Holy monkeys also live in the area that’s why it is also known as Monkey Temple.

There are two ways to get to the temple. You can climb up the 360 steps to the top OR drive towards the parking lot and enter at the other side. I opted for option number 2. 🙂 The driver dropped us off the entry way and after paying the entrance fee, Dinesh (my tour guide) and I went in the complex.

There’s a pond with the statue of the Buddha and a golden bowl at it’s feet. Some people would throw coins for good luck and they try to shoot it in the bowl for better luck i presume. The monkeys also do get to enjoy the pond, not for swimming but for drinking the water.

I saw some stupas with the eyes painted on all 4 sides and I said to myself, “Is this it?!” We continued to walk and I listened to Dinesh while he explained the history of the place then we went up a flight of stairs. I saw shops and cafes and I thought we are just going to look at the view of Kathmandu. I was in for a surprise!

There it was! The huge Swayambhunath stupa and a huge grin spread across my face. I must have looked funny so I told Dinesh that I thought it was the stupa by the entrance gate and he laughed.

We went around the stupa and I saw the most breathtaking view. It’s the panoramic view of Kathmandu Valley. I heard that sunset is really beautiful here, now that’s something that can make me come back and visit again. 🙂 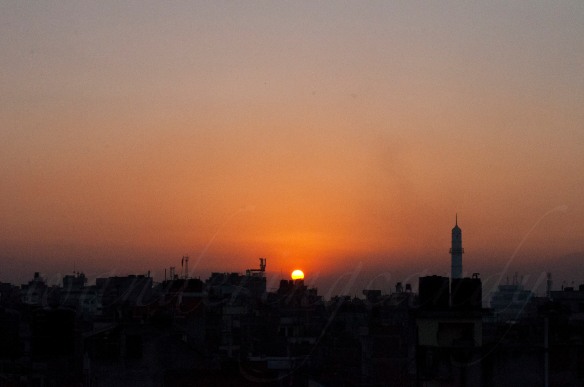 My first ever sunrise in Nepal. I went to the rooftop of the guesthouse to get this breathtaking view while happily observing locals doing their morning ritual of prayers and blessings.